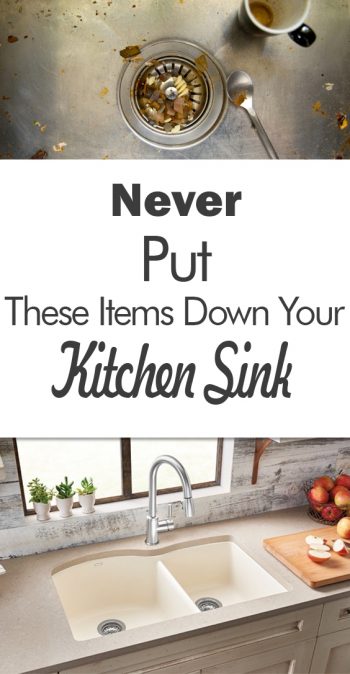 There are some things in the kitchen that mistakenly fall into the sink, and other things that we don’t realize could actually harm the pipes so we put them down the sink on purpose. But there are some seemingly harmless things that you should never put down the kitchen sink. Before you head off to clean the kitchen, read this post. You will probably be glad you did!

How many times have you spilled flour over the sink, or had a little excess left in the measuring cup, so you just rinsed it on down the drain? I’ll admit to doing it myself. However, you should never put flour down the kitchen sink. If you think about it, when flour meets liquid, it tends to form a gloppy mess. This gloppy mess can actually clog your pipes. I’m turning over a new leaf!

Coffee grounds are good at freshening stinky smells, but don’t be tempted to throw them down the sink, even if your drain could use a little freshening. Coffee grounds can stick together over time, leading to a nasty blockage in your pipes.

Those little bitty price stickers on your fresh produce are just too easy to rub off and rinse down the sink while you wash the produce, but you shouldn’t let them. They don’t break down easily, and will harm the environment. And possibly the waste treatment plant if enough people do it.

Small seeds and things like cherry pits and corn kernels are bad for your kitchen sink. They will expand in water, leading to a clog in your pipes.

The same thing is true for rice and pasta–even if you’ve cooked it, it will continue to absorb water in your pipes and expand. Over time, this will equal a nasty blockage in your pipes.

Never dispose of old medications by tossing them down the kitchen sink! They can pose a problem at the waste treatment plant, as well as for the environment and animal life. Take them to a pharmacy or medical waste disposal plant.

Hot oil does not belong down the pipes. Eventually it will harden and you will have a yucky blockage to call the plumber to fix.